How’s the weather, East Coasters? Haha, I know it’s cold, stormy and snowy there. But I won’t brag about how nice the weather in Oregon has been and how I could walk outside without a coat yesterday. Instead, I’ll talk about snow!

Winter 2012 was my first real snowy winter experience. It was my first winter in Nebraska, and although it was more snow than I had ever experienced, all the seasoned Nebraskans said that it was one of their mildest winters ever.

So on Superbowl Sunday three years ago (wow, was it three years already?) a large amount of snow finally came and I was trapped at the camp I was living at. I wasn’t really trapped because of the snow, but I didn’t have a car. And no one wanted to brave the weather to visit me or pick me up, so I got to eat all the cookies that I made for my one-person Superbowl party. Anyway, I didn’t mean to tell you about my pathetic party. I wanted to tell you what happened afterward…

You see, I was taking my EMT class at the time, so that was something that was always on my mind. I had gotten a pretty bad leg injury a few days prior since a giant log fell off of a tractor bucket and onto my leg, so I wasn’t able to do much outdoors. But it was snowing for crying out loud, and I needed to build a snowman! 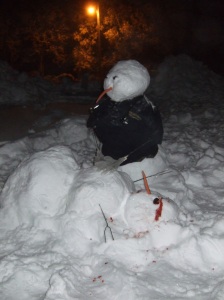 “Do You Wanna Build a Snowman” was not yet a song on everyone’s lips, but I certainly would have been singing that as I went out to find a good spot to build my creation. I had decided that I wanted something kind of Calvin-and-Hobbes-esque, like an army of snowmen or a snowman missing a head because another snowman used it as a bowling ball. Unfortunately, the snow was too powdery to roll any snowballs. I did, however, find a few chunks of snow compacted from being plowed off the road, so I sculpted those into a round shape. After stacking a few of those together, my first snowman was complete! 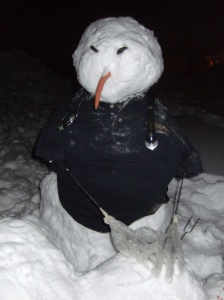 I had problems building a second one. The snowballs did not want to stack on top of each other. The top one kept on rolling off until the snowballs were side by side on the ground. That’s when it hit me: this snowman was suffering an injury! And of course, the standing snowman must be an EMT!

I hadn’t intended to make my snowmen as gruesome as the ones Calvin made in the comic strips, but I had to show that the snowvictim clearly needed help. I didn’t have any coal, but I did find some peppermint patties in the camp kitchen that made for good eyes, as well as carrots for the nose. I turned one peppermint eye sideways to represent an avulsed eyeball. Then, with the watered-down remains of a bottle of red hair dye, I splattered “blood” on the helpless snowpatient. But not to worry… 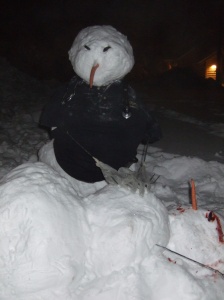 Soon it was SnowEMT to the rescue! Both of the snowmen feature arms made out of marshmallow roasters, but I put a pair of gloves on the EMT (since that’s always the first thing to do at any scene!) I wanted to put my uniform shirt on him, but was afraid that it would get wet, or worse, freeze to the snowbody. So I found a garbage bag and put that on the center snowball before putting my shirt on. I finished the effect with my stethoscope, but of course, I removed that after taking the photos so it wouldn’t get damaged. 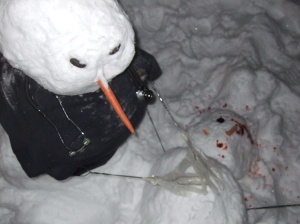 I don’t much care for freezing weather, and I’m sure that someday I’ll create a lifestyle that will allow me to release my inner snowbird. But I know that snow can also bring about some fun adventures.