I’ve been hostel hopping for two months now. Sometimes, it has been surprisingly lonely. I’ve booked six or eight bed dorms, and I was the only one there for days. But that just makes the times when there is good socialization even better. At my last hostel, they hosted a semi weekly pasta night. That was a fun and filling way to get to know a few other people. It even inspired a few of us to hang out together on the following evenings at a nearby gelateria. My current hostel only offers breakfast, but while I was pondering what to get for dinner the other evening, I thought, why not make a big bowl of pasta for whoever happens to be in the hostel?

Step 1 Buy some local ingredients at a nearby grocery store.

Making a big meal really doesn’t have to cost too much. I did it for under €5! I decided on pasta because it’s cheap and easy to make. I just picked out the kind of noodle that cost the least. Out of the sauce selection, there were two kinds that cost less than the others. I figured basil would go over better than spicy. For some creaminess, I grabbed a small package of Philadelphia cream cheese. (It’s not just an American thing!) I was about to add parmesan, but then found a similar kind of mixed cheese that was even less expensive.

You may also notice a pudding cup in this picture. I had no intention to mix it with the other ingredients, but it did turn out to be vital. See #3.

I should add that I really enjoy grocery shopping in foreign countries. It’s interesting to learn about the culture when you realize you can’t find refrigerated cookie dough, or that nutella is cheaper than peanut butter. Even back at home, I try to make it a challenge to get the best food at the lowest price through sales and swaps. It’s the easiest way to live like a local! 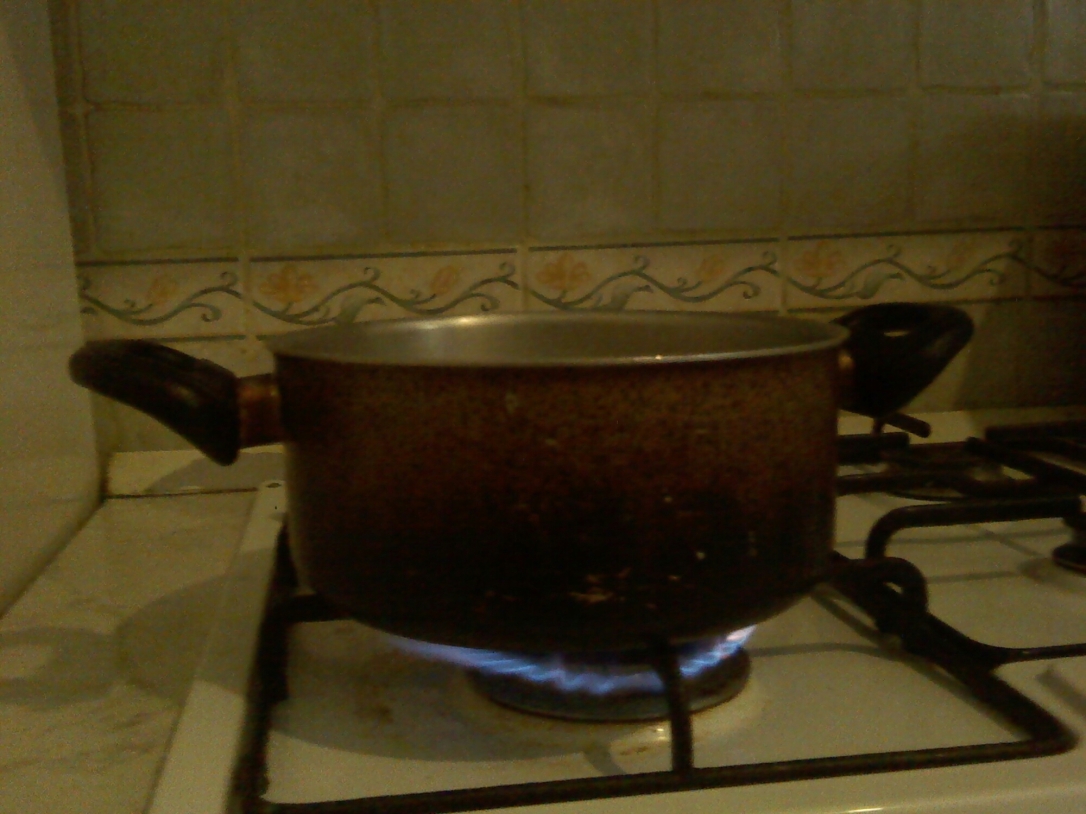 Naturally, before you even buy ingredients, check to make sure your hostel has the appropriate kitchen facilities to cook your dish. Last week, I almost bought a take-home pizza, until I remembered that that hostel had a stove top, but no oven. But I did find some mini frozen pizza that cooked in the toaster! Some hostel kitchens only have a fridge and microwave, and a few have no kitchen at all. In any situation, it’s possible to still make a meal, but it may take some creativity.

I was using a gas burner, and was only provided with a cigarette lighter to ignite it. This turned into a nearly dangerous game of lighting the stove without burning my fingers or inhaling too much gas. (Solution: set one end of a twisted-up paper towel on fire, and use that to ignite the burner.)

3. Think about when to s

Ideally, it should be ready to serve between the time day trippers arrive back from their adventures and the time night owls go out to party. Basically, whenever the most people will be at the hostel. Also consider people’s nationalities, as that will affect the time they get hungry for dinner. I was getting hungry at 5, which was way too early for everyone else. Since the water was taking a really long time to boil anyway, I put off my hunger with Italian-style pudding. 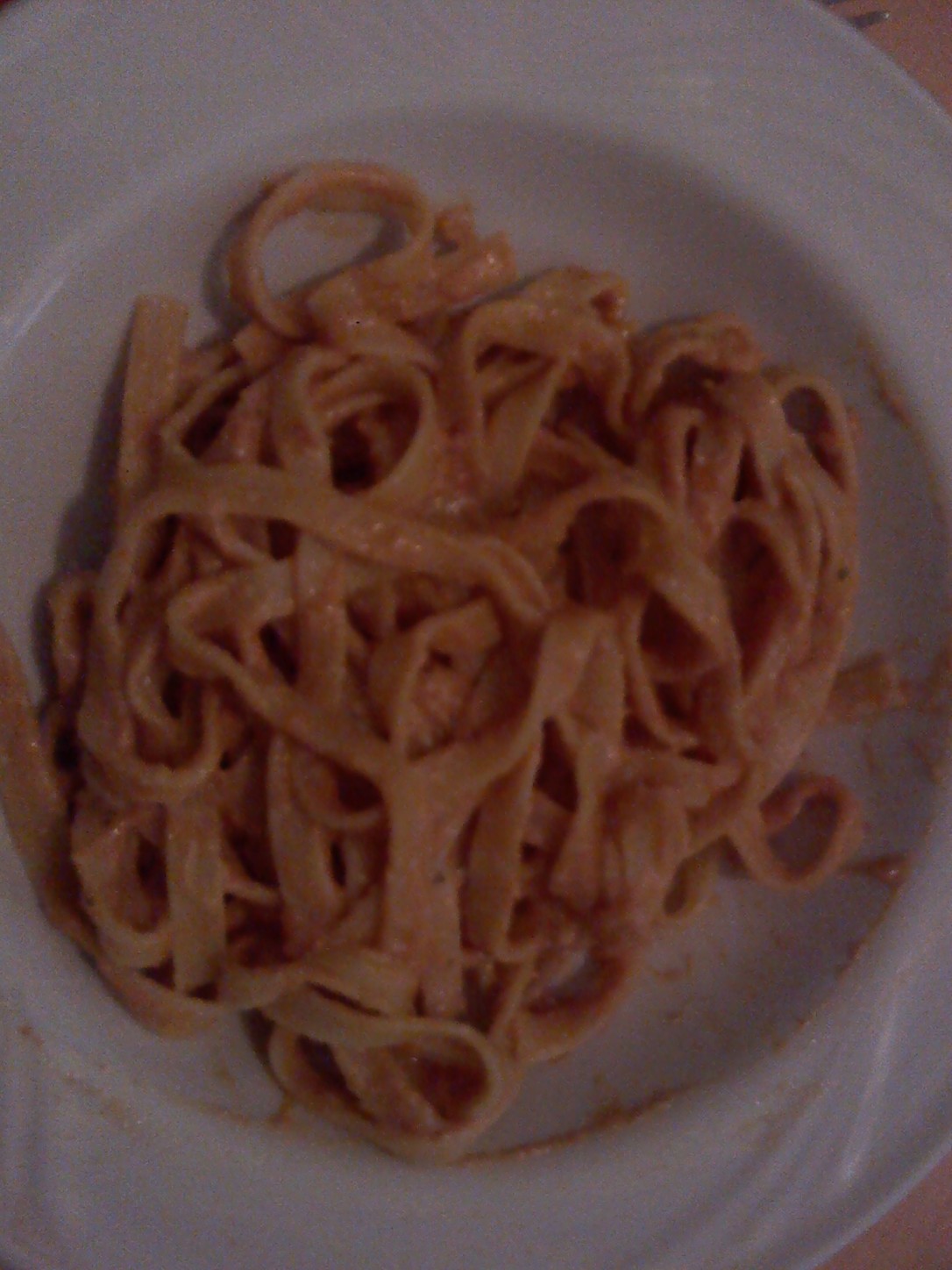 I put the pasta in once the water finally boiled. It only took five minutes to cook, and I spent most of that time looking for a strainer. The hostel was sadly strainerless, so I made due by carefully pouring out as much water as I could without dumping any noodles. Hostel cooking does require a degree of resourcefulness, so get used to using kitchen tools for an unintended purpose.

Once the pasta was ready, I set it back on the burner and added half a block of cream cheese. I looked for some sort of oil to help it mix, and found free butter in the fridge. (Nice note: Never borrow food with a name written on it; only use things that clearly belong to the hostel! I lost a lot of milk and bread in Barcelona because people didn’t follow this golden rule of hostel stays.) Then I dumped in almost the entire jar of sauce and mixed thoroughly. I sprinkled on a little cheese, but left the bag out so that guests could determine their own amount of cheese.

Since I was in a small hostel, and many people had not checked in.for.the day yet, I could only get one person to join me. But one new friend is all you need! Dinner turned into a whole evening of conversation, including a trip to my favorite ge

6. Do something with leftovers.

Since I planned for more people, I had extra pasta and cream chese. I decided to have another hostel dinner night the following evening. I just had to restock the sauce, and this time I used a jar of pesto. More people had dinner this time around, and it again ended with an evening of conversation and dessert at the gelateria. So I guess this means that making a free dinner is a proven successful way to make traveling friends!

I think back to other times hostel buddies shared their food and friendship. At places that don’t include breakfast, a cup of yogurt is so helpful. In Madrid, a roommate forced me to take a peach in my day pack, concerned about me eating healthy foods! Even at my first hostel experience in Nashville years ago, one roommate would grill dinner for everybody, just because she found some food on sale! Experiences like these encourage me to pay it forward, and perhaps I can inspire others to do the same!

Have you ever been shown kindness in your travels? How have you paid it forward during a trip?

2 thoughts on “Recipe for Traveling Friendship”