About a month and a half ago, I attended a dinner benefit for Wilderness Trails. That evening, I met the program director for the girls’ camps and offered to help out for camps and retreats. She was eager to get me involved, but it wasn’t until this weekend that I was available all weekend during a girls’ retreat. So Friday evening, I met the other leaders in a store parking lot and we loaded up the van and headed up the mountain!

Wilderness Trails is a free camp for kids in need. In the summer, they have outdoor camps where everyone sleeps in teepees, but in the winter, it’s a bit more luxurious. They have a six-bedroom lodge complete with bathrooms, a kitchen, and a large meeting area, where all the weekends retreats during the school year take place. The organization is based in Jackson County, Oregon, but this weekend’s camp served girls in Klamath and Douglas counties, so it was a quiet ride to the Cascade Mountains with just the adults! Since I had never been to Wilderness Trails before, I was in for a real treat when we arrived at the lodge that evening.

I’ve been working at camps since I was twelve, the age of some of the girls at this camp! When I was fourteen I became a counselor, and I got a paying summer job at camp in high school. For the past three years, I was a full-time, year-round camp employee, a short career that I thought I had ended back in August. Apparently not. After this weekend, I definitely think I’ll continue working with Wilderness Trails in any way I can! This weekend may have seemed small for other camps I worked at, but it was a huge weekend for them: 33 campers with 7 adults! Forty is more than their lodge typically holds, so once all the bunks were filled, we covered most of the dorm floor with mattresses! The dorm I stayed in had eight beds, but since we had 11 people, it ended up looking like this:

Yeah, it got pretty messy in just two days!

Because it was raining most of the weekend, and cold all weekend, we spent most of the time in the lodge. We ate delicious meals, played games, did devotions, made crafts, did hair, and one girl even taught me how to finger knit a scarf! On Saturday night, we set up a projector and watched God’s Not Dead. I hadn’t seen that movie yet (I was invited to an advance screening before it hit theaters, but an ice storm hit the night I was supposed to go!), so I enjoyed watching it for the first time. Although I didn’t find it to be the greatest movie, it did have a good plot line and message.

When we weren’t in the lodge, we were in the barn. On Saturday morning, we went there to play games that were too active to play in the lodge. In the afternoon during free time, some of us returned for more fun. They had bows, arrows, and bales of straw for indoor archery practice. On one of the rafters hung a rope swing that many of the girls played with. They even had an auto-belay rock wall! I had a lot of fun, even though I myself didn’t do anything except shoot a few arrows. (I quickly gave up on that because the arrows were missing fletchings and none of the bows suited me… and I’m not a huge fan of archery, although apparently I’m an archery snob when I do end up doing it!)

Since I hadn’t seen much of the camp property, when I got my one-hour break on Saturday afternoon, I spent most of it going for a walk. This meant bundling up in my heaviest coat and donning scarf and mittens, but it was certainly worth it. I began outside of the lodge, which is surrounded by picnic tables.

I then walked past the barn and along a dirt road. I was hoping that this was the way to the entrance, since I wanted to take a picture of the entrance sign. I had seen a glimpse of it on Friday night, but it was dark when we arrived, which apparently messed up my sense of direction. I eventually made it to a trail marker, and I was so lost, it couldn’t even point me in the direction of the entrance. 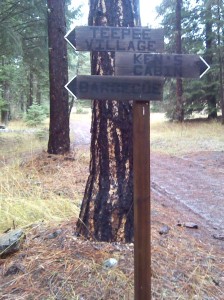 Instead, I ended up at the A-frame cabin, which was pretty cool to look at the exterior. Between the lodge and the A-frame, I’m tempted to organize my own group and rent out the camp!

After walking for awhile, I figured I wasn’t going to make it to the entrance. (I found out the next day that I had been walking away from the entrance the entire time!) Plus, it was starting to rain, so I decided to turn back. But then, the strangest thing happened. It started to hail!

Since it was only little bits of ice, the hail didn’t hurt, so I decided to take a longer way back to the lodge. This way, I spotted the tepee village where the summer camps are held. Of course the tents are taken down for the winter, but the play structures and outhouses were still there!

On Sunday morning, we got a big surprise…

It snowed! This trip had covered every type of winter weather: dry, rain, snow and hail! Because the snow had gotten fairly thick for such a short amount of time, we weren’t sure if we were going to be able to make it to the church we had planned to attend. But we set to work anyway, packing up, cleaning up, and loading the vans. Fortunately, we were able to make it to Mountain View Christian Fellowship.

Mountain View is a small cowboy church up in an area that’s mostly for camping vacationers. Even though our group more than outnumbered their regular attenders, they were wonderful to welcome us with open arms. After feeding us a big breakfast, they involved the girls a part of the worship session. I know some of these girls don’t attend church regularly, and some weren’t exactly sure how to behave, but the pastor was great with them. We he was taking prayer requests, many of the girls asked for prayers for their imprisoned parents, which was a pretty emotional time.

After the service, we ate a quick snack, then we all got into our assigned vans headed toward our respective home counties, and said good bye. It was a great weekend that I hope to repeat!

Oh, and the church had two pet dogs too, which were pretty cute.