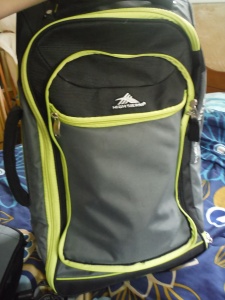 During after-Christmas sales last December, I got a bargain on the kind of luggage I wanted to take to Europe. It was a wheeled suitcase that not only featured a long enough handle so that my 6’1″ body didn’t have to slump over to roll it around, but it also contained hidden backpack straps for when I realize that a roller suitcase is not ideal for cobblestone streets! The front part (not shown in picture above) zipped off so it could be used as a daypack. It had nearly everything I could wish for in a a suitcase. It’s even the maximum carry-on size!

I’ve used this backpack a few times since buying it, kind of like a test drive in preparation for the big trip. I’ve taken it to Wilderness Trails. I used it over the course of my tri-state California road trip. I also used it this past weekend for the outdoor retreat. This time, I wanted to study my packing, and see if I can use this experience to learn to pack better.

Since this retreat was for two nights, I would only need two changes of clothes, right? However, there were a few variables. I would probably want shorts or capris for this trip, but I had no idea where I was actually going. Would there be a breeze? Would we be in a shaded area? Would cold weather hit? Not knowing these kinds of variables, I decided to pack a pair of jeans and a long-sleeved under armor shirt. I also decided to pack three shirts since I figured I had a good chance of getting one dirty or sweaty. I also needed to pack swimwear. Since I don’t wear standard swimsuits, this meant that an extra swim tunic, bikini top, swim shorties, and sarong had to be packed. Still, in total, all these clothes took up about one-fourth of the main compartment. (Socks, hats, and undergarments took up little room in the front pocket.) Of course I had completely forgotten about sleepwear until the last minute, so I did shove in pajama pants and a three-quarter sleeved shirt right before leaving.

Most of my luggage weight consisted of non-clothing. Since this was a camping type of experience, I would need to bring a pillow and sleeping bag. These two items on their own were larger than my suitcase, but for most trips (like Europe), these things are not necessary. The other items, as you can see in this picture, include sandals, towel, Camelbak, wallet, phone, glasses, sunglasses Bible, notebook, car keys, head lamp, flashlight, pedometer, mug, and bag of toiletries. I put the Camelbak and the small items that are normally found in my purse into the daypack compartment to ensure I had easy access to them. Everything else fit into the remaining space of the main compartment. 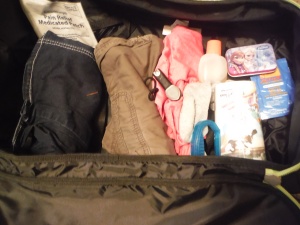 Things I Didn’t Use

Clothing was the main thing I over-packed. I ended up wearing my capris on both Saturday and Sunday (since there were only a few hours on Sunday that I wasn’t in my swimwear), which meant that both the shorts and jeans were unused. I did end up using the long-sleeved shirt as an extra shirt, but I still had one extra shirt even after that. I don’t drink coffee, and although there was some tempting-sounding hot chocolate, I ended up only drinking water during the entire trip. That meant my mug stayed clean and inside my bag. I only used my head lamp for light, so my flashlight was unnecessary. Other than that, there were several toiletries I did not use. I didn’t use soap (hey, we didn’t have a shower!), nail clippers, hair tie, bug wipe (I had bug spray instead), cotton swabs, or the icy-hot patch.

Most of the things I brought that I didn’t end up using were brought because I was unsure of what to expect. Now I know that it’s very important to do my research for every city I plan to go to in Europe. I will definitely be taking more clothes there than I did on this trip, but I’ll know that I can wear things multiple times, especially legwear. One piece of clothing it seemed like everyone but I wore was athletic leggings or fitted yoga pants. Seeing how versatile they were for sleeping, exercising, getting wet, staying warm, and simply hanging out, I went out and bought a pair yesterday!

A few items I brought on this trip will not go to Europe in order to save space. The biggest thing I will not bring is a beach towel. Most hostels provide towels, and I’ll have a small towel for the ones that don’t, so this will free up about a quarter of the main compartment. I will also not bring my Bible. Now, as a Christian going on a trip for three months, that sounds weird, but hear me out. I love my full-size waterproof Bible for trips like these, but it’s just too heavy and space-consuming for Europe. Instead, I will bring the miniature New Testament with Psalms and Proverbs that the Gideons give out for free. If I want to read a passage of scripture not included in that Bible, I can always access it on my phone. Speaking of my phone, I will use that as my flashlight in Europe instead of bringing a redundant item.

There were some “emergency-only” items in my toiletry bag that I actually ended up using. Fortunately I didn’t need these things for myself, but as the EMT/former Girl Scout of the group, others ended up benefiting. I offered a sample pack of bacitracin and a band-aid for a tick wound, and afterwards when everyone was doing a tick check, several ladies used my nit comb for closer examination. Hand sanitizer was also very useful throughout the trip- it was the only way to wash hands! One thing I didn’t bring, but someone else gave to me, was a Benedryl pill. This helped will all the allergens collected from the outdoors and also helped me fall asleep that night. Benedryl (well, the store brand of Diphenhydramine, at least) was already on my packing list for Europe, so I made sure to buy that yesterday, along with a couple other useful medications. Needless to say, I will bring first aid supplies along with me!

These are just a few results from my packing experiment this weekend. I know that an outdoor retreat and urban backpacking Europe are two completely different beasts, so I guess I still have plenty to learn before cramming three months of my life into a carry-on and setting off!

What is your all-time best packing tip?

3 thoughts on “The Packing Experiment”