Here it is: the last part of my recent road trip! It started by going through Northern California, then to Twentynine Palms, and then small attractions around Southern California. (Click on the links to catch up.) To really capture the road trip style, we chose not to take the I-5 back home and instead explored some cities I had never been to before. 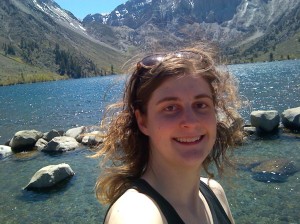 For our first night, we stayed at Mammoth Lakes. Mammoth Lakes is a ski and summer resort type of town, and we just so happened to hit it between seasons. So while we were too late to be snowed in (and I was very thankful that the only snow seen was just a little bit high in the mountains), the summer activities weren’t in full swing yet. But we still found plenty of things to do- drive through the National Forests, see a few of the lakes, and of course, eating. Our no-frills Travelodge surprised us with cookies in the afternoon and round-the-clock free beverages in addition to the included breakfast. That was great, but we still needed dinner. We chose to share a plate of nachos at Gomez’s in Village Plaza. The Village Plaza looked like it would be a happening place to hang out at in season, but even then, there were lawn games such as ladder golf and cornhole, as well as a fire pit in the center of the square!

Mammoth Lakes offers year-round bus service- for FREE! This even includes a free trolley. Most people take it to get from place to place, but we decided to turn the trolley ride into a round-trip sightseeing tour. For most of the trip, we were the only passengers, so the driver was telling us about all sorts of places to visit. One of those was Obsidian Dome, which we visited the next day.

It was really cold and windy there, so we didn’t spend as much time as we would have otherwise, but it was neat to see all these rocks made of beautiful shiny obsidian!

While continuing on our road trip, we stopped by Mono Lake. Unfortunately, we were there on a Tuesday, when the visitor center happened to be closed, but we still enjoyed seeing the unique tufas (salt towers).

Then we took a detour to Bodie. I’m not sure why anyone would want to live in Bodie, but that probably explains why no one lives there anymore! It is a ghost town several miles off the road, and was once a bustling, godless mining city. I’ve only been to a three-building ghost town before, so it was incredible to see all the old buildings, and most of the town had been burned down! We even went to the cemetery and saw the gravestone of the town’s founder W.S. Bodey. (Yes, his name is spelled differently than the town itself- the town was named after a typo!)

After more driving, it was time to cross the border into Nevada! Have you ever tried to take picture of a state sign from a speeding car? It’s so hard to get it to look good! 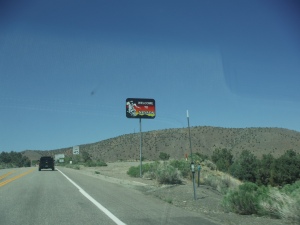 We ended up in a little city… or was it a big city? Oh, that’s right, it was the biggest little city in the world! 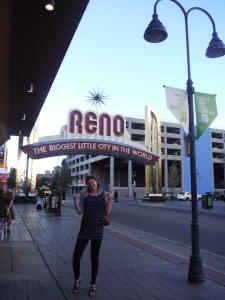 We stayed at Harrah’s. I had never stayed at a casino before, so it was really interesting to see everything there.

After dinner we decided to walk off our buffet babies. Our intention was to go through the different casinos and attractions like that, but we found some other interesting things too. For instance, we happened to come across a part of the sidewalk where blue jeans were invented. 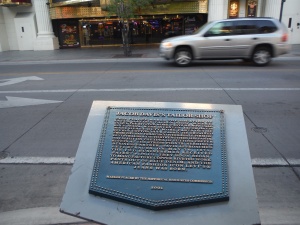 Just a little bit further down the block, we found a Blarney Stone stuck to the wall! 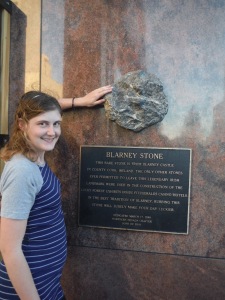 Circus Circus was a blast. It is connected to several casinos, so it was a change of pace to suddenly walk into a room that was offering toys for prizes instead of big bucks!

Besides looking at (but not actually playing) the games, we took a train ride in a connecting casino and then went back to Circus Circus to watch a free show called “Best Friends”. We thought it might be a clown show or singing or something like that, so we were thrilled to find that it was actually funny and incredible dog tricks!

When we got back to our 14th floor hotel room, we decided to sleep with the window shades open so we could enjoy all the lights and sights of Reno.

The next day we visited some small towns. One such town had the Alpine Drive-In, a locally-owned burger joint where we ate lunch. 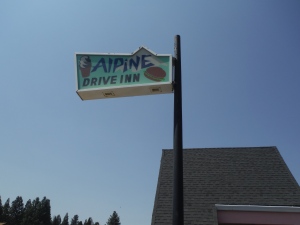 And our final stop of the day was… a landscape supply yard? Okay, it wasn’t planned like that. But after we crossed the border into Oregon (after we crossed from Nevada back into California), my mom dropped me off at Harry and David to get my allotted former employee free food while she picked up a few things for dinner. It took her awhile to come back to pick me up, and I was almost worried that something might have happened. Something did happen, but it wasn’t that severe of an emergency. My dad had called her explaining that he was picking up some gravel (they’re redoing their patio), when the van’s fuel pump stopped working. So we had to come rescue the dog from the heat and make sure that his coworker could pull the gravel home while making sure the van could stay there until the tow truck arrived. It was an unexpected way to end a tri-state road trip (hey, we were even in all three states that very day!), but one lesson from the school of travel is to expect the unexpected!

1 thought on “The Tri-State Journey”