Just last Thursday, I returned home from a nine-day road trip with my mom. Some days didn’t have too much going on, so I won’t bore you with details of the mundane. But some days were jam-packed with activity, warranting multiple posts to describe all that happened on the trip. The very first day was probably the most eventful day, so this post only covers Day One.

Oh, and one more thing before we begin: last month I finally got Instagram! Feel free to follow me (I’m @JessicaLippe, of course!), and to see all the pictures specific to this trip, check out the hashtag #roadtrippingwithmom.

We decided to leave early on Tuesday, April 21st in order to pack a full afternoon of fun at that night’s destination. And even though I think 6 am was a little too early, we’d often leave at 3 or 4 am when I was younger. Most of our relatives live in Southern California, so our family would usually make a straight shot of the 11-hour drive to get there. But I had a little treat for my mom this time around, so in exchange she agreed to take me to the Sundial Bridge, an attraction I always saw from the freeway but we never had time to stop at.

The Sundial Bridge is a piece of art spanning a river in Redding, California. It is literally a giant sundial and has markings for telling time at certain times of day. The bridge itself has a walkway made of green glass. Even though it isn’t exactly see-through, our first few steps out on it gave us that shaky feeling! 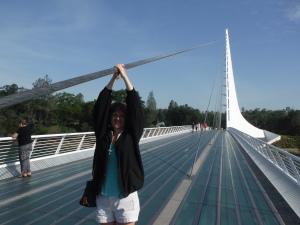 When taking these pictures, we both noticed that the cable was pulsing (possibly from the birds landing on it further up?). But somehow this inspired us to have me hang from one of the cables. 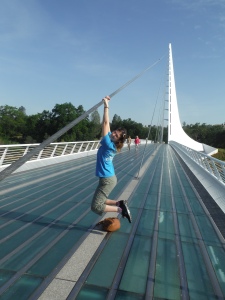 The Sundial Bridge was not the only thing around. It was actually part of a very large park with several other attractions. We did walk around a little bit, but I would love to go back there someday, perhaps with a bicycle.

The next stop was a place we used to always use when going on trips to California: the city of Corning. You may not have heard of Corning before, but there’s a good chance you’ve eaten olives from there. And our go-to place is the Olive Pit. It’s been about four years since I last went this way, so some of the things have been changed a bit, but I was comforted to know that they still have a wide variety of oils, vinegars, and jams to sample on.

One thing from Olive Pit that I had never tried before was their shakes. They have some typical shakes, but they also have specialty shakes made out of flavored balsamic vinegar. I chose the Dark Raspberry Balsamic Vinegar shake. Yes, it sounds weird, but it is so good. You’ll just have to try it for yourself to see what I mean! 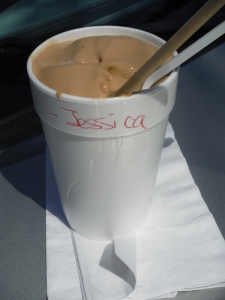 The next driving break we took was for lunch. It’s not right to go to California without stopping at an In-N-Out. There are two things I really like about In-N-Out: 1. There is a Bible verse printed on every cup and food wrapper, and 2. Instead of ordering frozen french fries like most fast food places, they get shipments of fresh potatoes and make the fries right there. (I also like their milkshakes, but since I just had a balsamic vinegar one, I decided to skip it this time.) I tried to convince my mom to dress up in their paper hats, but she refused, so the only picture I have is of a cup and food wrapper:

Not too long after lunch, we arrived at the place where we’d stay the night. In order to make the most of this trip, I offered to introduce my mother to hostelling. She agreed to it, but since she can sometimes be particular about things, I wanted to ease her into staying in hostels instead of scaring her away. I found a hostel along our route in Sacramento that was originally a Victorian mansion, and I knew that would be just the sort of thing she’d love.

Probably the best part of being in Sacramento was just looking around the hostel at all the Victorian-style things they had!

And because there wasn’t much of a price difference between two dorm beds and a two-person private room, I sprang for the private room. I’ve been upgraded to private rooms at hostels before, but I’ve never actually paid for one, so I guess that was a first for me too! 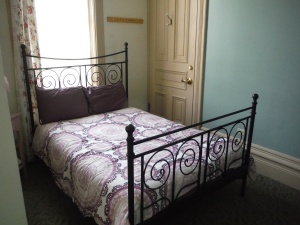 The one attraction we didn’t want to miss out on was touring the California State Capitol Building. We went in the travel clothing we had been in all day, but once we got past security, we realized that everyone else was wearing business suits and dresses. We stuck out like sore thumbs! We tried to make excuses, such as it was just because we weren’t from the state, but my mom was actually born in California, so that didn’t really work.

We learned a lot of things on the tour. For example, for many years the building was not earthquake-safe (not a good thing for the building that represents California!), so everyone that entered the building during that time had to sign a waiver. Eventually they closed down the building for several years and a did a complete remodel. My mom then realized that when she had toured the capitol with her dad as a teenager, it must have been just a matter of months before it was shut down!

We also learned that the dome seen on the outside isn’t the same dome that is seen on the inside. The outer dome is too tall for artwork to be seen from the inside, so a shorter inner dome stacked inside creates the illusion that they’re the same. However, there’s quite a bit of space between the two!

And although there was no chance we could get inside, we did have to stop by the outside of the governor’s office. When Arnold Schwarzenegger was in office, he got a bear statue and let it stay at the Capitol. Our tourguide told us they had secretly named it “Bacteria Bear” because so many tourists rub it! 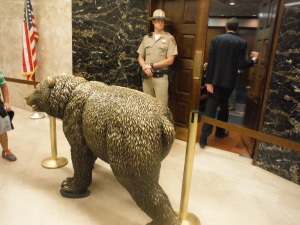 The Capitol was our only planned attraction, but we decided to walk around and see the other sights too. We went to some of the shops in Old Sacramento and also looked over the Sacramento River.

Before retreating back to the hostel, mom and I stopped at a Pho restaurant. We’ve enjoyed the soup made at home, and I was interested to see what it was like when authentically made. The spring roll was delicious, too.

And although we got some sleep at the HI-Sacramento Hostel, we once again had to get up early the next morning (though not as early as the day before) and make it the rest of the way down California. But I’ll save that for tomorrow!

7 thoughts on “The Beginning of a Road Trip: Exploring Northern California”