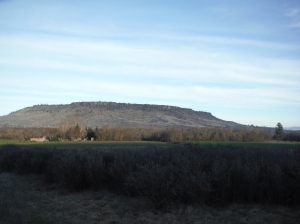 The Table Rocks are a sight to see in Southern Oregon. These plateaus are not only a unique view in the mountain range, but the hiking trails on each of these twin mountains leads hikers to a unique view of Jackson County at the top. 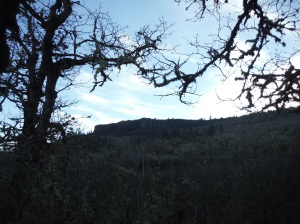 I’m actually ashamed to say that, although I always lived within a half mile drive of these mountains for most of my childhood, I only hiked them a handful of times. I believe the first time was when I was in fourth grade and we took a class trip there. Even our first-grade buddies were able to keep up on the strenuous hike! I remember hiking with my family once during the winter rain, and my shoes got stuck in a sticky mud puddle, causing me to face plant in a pile of mud! There was also one time I went with my youth group. In our middle school rebellious state, my friend and I carved our initials on a tree and watched as some of the boys threw things off the edge of the mountain, including a paper airplane and an orange. The last time I hiked up Table Rock was when I was still in high school, with a few of my closest friends at the time. Being able to count my Table Rock memories on one hand, I knew I needed to return. 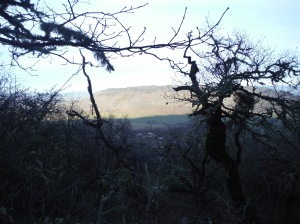 Last weekend, I had Saturday off. Between working at a call center and being a weekend nanny, this is an incredibly rare occurrence, so I had to celebrate it in some way. I invited a couple of friends to do something with me, suggesting Table Rock as an option. Unfortunately, while I had a rare Saturday off, they did not. Not to worry though; I’ve traversed the continent by myself, I should be able to manage a little hike a few miles outside of town!

On Saturday morning, before I even changed out of my pajamas, I received a phone call. I was off from jobs #1 and #2, but job #3 called. The housemother on duty at the teen mother home wasn’t feeling well, so I was asked to cover for her. I love spending time there, so it was not a problem to change my plans. Besides, I would get off at 3:00, so I would still have time to go for a hike afterward. 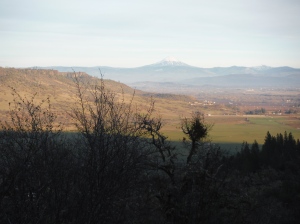 Thinking back to my first hike, we must have taken a lot of breathers and extended stops where our guides explained the flora and history of Table Rock. The incline really does get your heart pumping! It’s less than two miles to reach the summit of about 800 feet, and I was so relieved to get to the top. 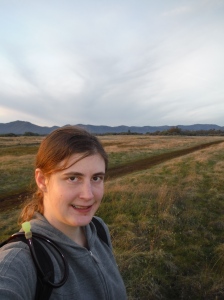 My goal behind reaching the top (besides the mini-challenge in itself to reach the top) was to get a bird’s eye view of the county. The trail takes you to the side of the plateau opposite of the metropolitan area, so I began walking to the other side to see what I could see. 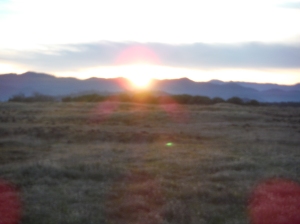 What I saw was a sunset. While pretty, it meant that I would need to turn around soon in order to make it back to my car by the time it got dark. So after spending several minutes at the summit, I turned around and headed back down, determined to try again in a few days. 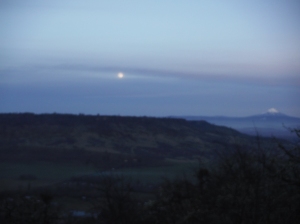 My next day off was Thursday, so I headed back to Table Rock that day. The problem was, while I wouldn’t have gone if it was raining (you know, the whole mud thing), it was incredibly foggy. 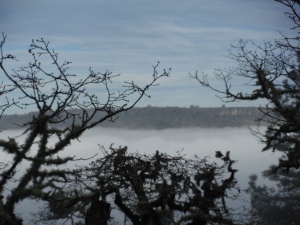 So I waited until the afternoon in hopes that the fog would lift. It did clear up a little bit, and when I got to the top of Lower Table Rock, it was bright and sunny. Of course, that was just because all the fog was below me! Yes, a thick layer of fog separated me at the summit from the views below. Although, it did provide a unique view of the fog. It almost looked like an ocean! 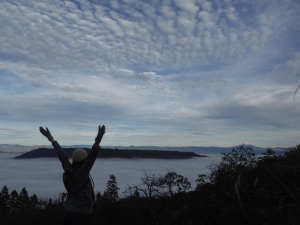 Two hikes in one week, and I still didn’t get what I came for. But third time’s the charm, right? Perhaps next time, on a clear, dry day with plenty of time before dark, I will have a picture of an incredible view to show you! 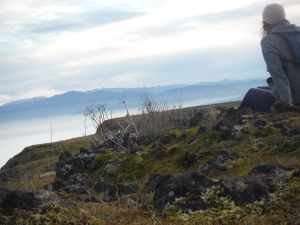 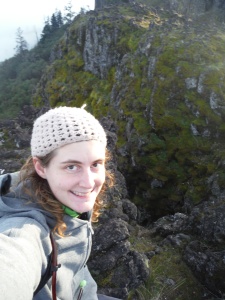 2 thoughts on “Up There on Lower Table Rock”