Before even watching the movie “Letters to Juliet”, I was excited to go to Verona as part of my Mediterranean Trek. So I planned out my visit to this city mainly by borrowing the movie from a friend. The only mistake I made was that I booked a mere two nights in Verona, leaving me with just one full day to experience all that this quaint city has to offer.

My first night in Verona was spent arriving by a delayed train, then struggling in the dusk to find where my BnB was before finally giving in and taking a cab, so I didn’t see much in the midst of that stress. I started the next day bright and early with a walk to Juliet’s courtyard. This is what you see in “Letters to Juliet“, and it’s the perfect place to write a letter to Juliet! Because I got there early enough, there were only a few other people there. I found a quiet place by the grafitti wall of love to write my letter. In the movie, you can see women sticking their letters into the cracks of a wall. You can still do that, however, to make sure that a secretary of Juliet receives your letter, there are better practices in place now. The best thing to do is stick your letter in the red mailbox. Alternatively, if you go inside the house, you’ll find computer kiosks where you can e-mail her!

I wasn’t sure if I wanted to go inside the house at the time, so I headed over to the area where you can find Juliet’s tomb. It turns out that you can get a discount by getting a combination ticket to Casa de Giulietta and the museum with her tomb, so I did that. The tomb was the best feature of the museum it’s housed in, but there are other art and artifacts to enjoy as well.

I eventually went back to the house, Casa de Giulietta. Inside were a lot of artifacts from some of the Romeo and Juliet movies, such as costumes and a prop bed.

But the best part of the Casa was getting to stand on Juliet’s balcony, and pondering “Wherefore art thou?”

While foot traffic inside the Casa wasn’t so bad, the courtyard was getting jam-packed with tour groups and other visitors. Here’s a tip: If you want a truly magical and meaningful experience with Juliet, go in the morning before the day trippers roll in! 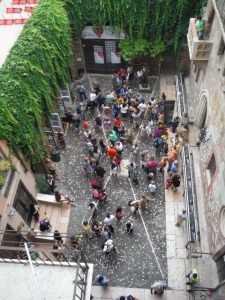 I went to the courtyard for a third time in the evening, and it was even more crowded then! But this is when I enjoyed putting my own graffiti on the wall entering the courtyard. I’m not a vandal, it’s actually encouraged! 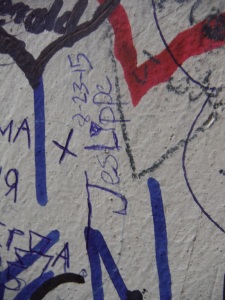 In another spot of the courtyard is the only place in Europe where it’s actually encouraged to place a love lock, as it will eventually become a part of an art piece. (But seriously, don’t put a love lock anywhere else! I saw locks on every fence and bridge in every city I went to, and it just looked inconsiderate and trashy.)

There are a lot of other things to do in Verona, such as go to the Arena, walk by the river, or explore the castles. I did some of these things, but since none of them are directly related to Juliet, I’m going to fast forward to today.

I had heard it would take a long time to get my letter back from Juliet. I was hoping it would arrive to my house around the time that I came back from the Mediterranean, but such was not the case. I kept it in the back of my mind, and thought about it sometimes when I went to get the mail. But today, I was totally not expecting it!

I opened the mailbox and grabbed the letters out. One had an Italian postmark, and the return address said it was from “Club di Giulietta”! I squealed in excitement. I scared my dog by my squealing. I hope the neighbors didn’t hear me squealing. I raced back to the house so I could carefully open the envelope.

I don’t remember exactly what I wrote to Juliet, but it was a decent-sized letter that could be summed up as “where is he?” I was honestly just expecting the response to be a canned sentence on an index card. I was surprised at how much thought was put into the letter I received! Here are a few of my favorite quotes from the letter.

“Finding love isn’t easy. In fact, it should be something they teach in school along with how to manage your finance and finding a job that you like.”

“Some people fall in love quickly- others warm to it slowly. But there is one common thing about it- that love doesn’t happen if you don’t take action.”

“Take the plunge- and live it, not dream it.”

By the way, while I would definitely encourage a trip to Verona if you can, you don’t need to go there in order to get a letter from Juliet. Just send your letter to:

In an age where it’s rare to receive a beautifully handwritten letter, it’s even more special to receive one from a fictional character!

1 thought on “What to Expect with a Letter to Juliet”