Distance: The entire park is five acres, and you can choose however much of the path (or off-path area) you want to walk on. There are a few steps on an optional part of the pathway, but other than that, this is a very flat, very easy walk that anyone can participate in.

Today was a very rainy morning. I had lagged behind on walking this week, and I knew that the hike I wanted to take would be incredibly muddy. I thought about skipping a walk entirely this week and just posting a walk I took previously. But then while I was out driving, I found myself headed toward my first-ever hometown of Rogue River, Oregon. I don’t remember living there because I moved to California before my first birthday, but I remember visiting as an older child.

When I went to the Wimer Covered Bridge a few weeks ago, I passed a church on the drive there. On the drive back, I recognized tennis courts and a bridge behind the church building. I immediately pulled into the parking lot (which turns out is shared by the church and the city park) and walked down memory lane… but only in my mind. I was pressed for time, and had a kid sleeping in the backseat who couldn’t be woken up even for something as fun as a park.

When I realized I was headed to Rogue River on this rainy morning but didn’t know what I was going to do once I got there, I decided to enjoy walking through this park despite the weather. Because of the downpour, I was the only one there. Everyone else sure missed out! 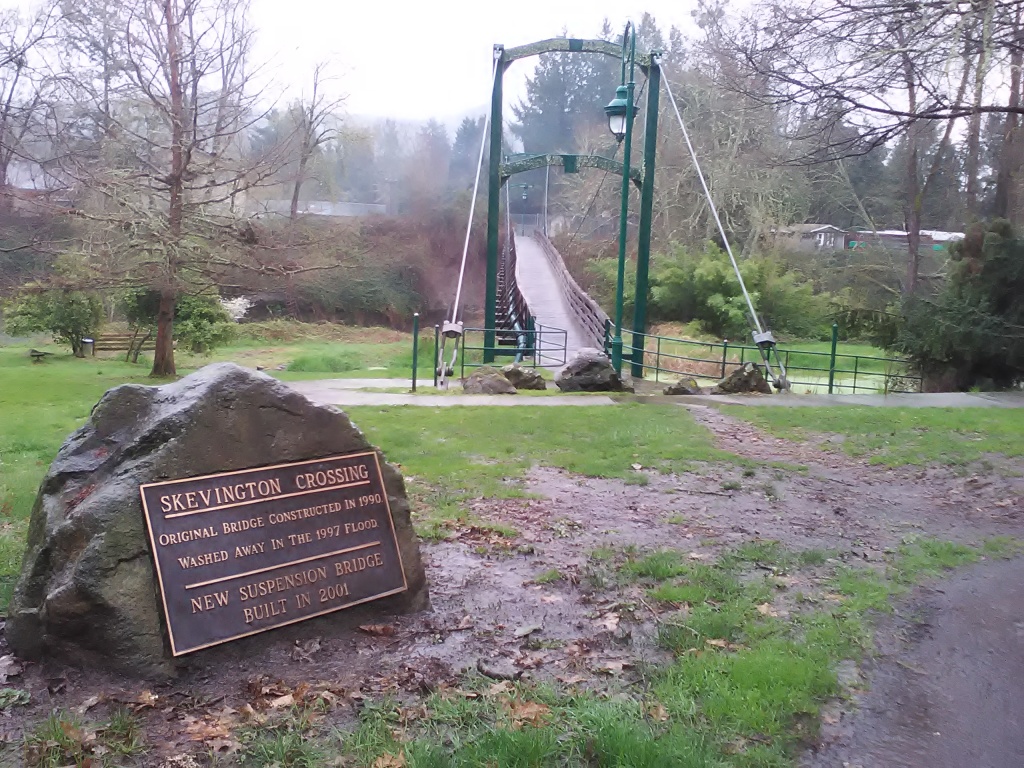 Even though I remember going to this park a few times many years ago, I only remembered the sports courts, the footbridge, and the picnic tables near a playground. Palmerton Park is actually best known for being an arboretum. But it turns out I didn’t start at Palmerton Park. I had parked my car at the smaller adjacent Anna Classick Bicentennial Park, which includes a variety of sports courts such as tennis and basketball. I then headed across the Skevington Bridge.

I guess I have a thing for walking across previously-collapsed bridges. The Skevington Bridge was washed away twenty years ago during a flood, but then rebuilt in 2002. It was one of those suspension bridges where you could feel the bridge move with each step you took. It crossed Evans Creek, as well as a foliage green pond, before allowing me to arrive and continue my walk in Palmerton Park.

Because of the rain, I mostly stayed on the path, though I occasionally adventured into the wet grass to get a better look at a unique tree or to take advantage of a photo opp. (Because this was a spontaneous trip, I had left my waterproof camera at home and instead had to protect my phone against the elements while trying to capture pictures!) I walked along a stony path area with a fountain feature. Despite all the extra water it was receiving, it only provided a trickle of a waterfall. I then went around the playground and to the official front of Palmerton Park. Since I had come in from the back way, I had missed out on a big informational sign showing how Palmerton features dozens of different trees from all around the world. There was a coastal redwood, a monkey puzzle tree, and other unique plants. I think my favorites were the trees that were currently in bloom. It was evidence that it is indeed spring!

-Since this is in Oregon, some sort of rain protection is recommended. Most locals will tell you that we don’t like to use umbrellas. But a raincoat is subtle enough that you can still blend in.

-Look for inspiration around the park. I found one unusually unique inspirational quote engraved on a sign. (I’m not sure why it was there, but it did make me ponder for awhile!) And of course be inspired by the nature itself.

-If you want to enter the way I did, go down Pine Street and turn in when you see Rogue Valley Community Church. However, the official entrance is on Evans Creek Road.

It looks like I’ve shared about city park walks two weeks in a row! But some parks have some of the best walks. Do you enjoy walking in a park near you? Tell me where it is!

(PS: I’ve got a bonus post coming at you this weekend! Also check out my Instagram for a preview of what to expect next week, @jessicalippe.)