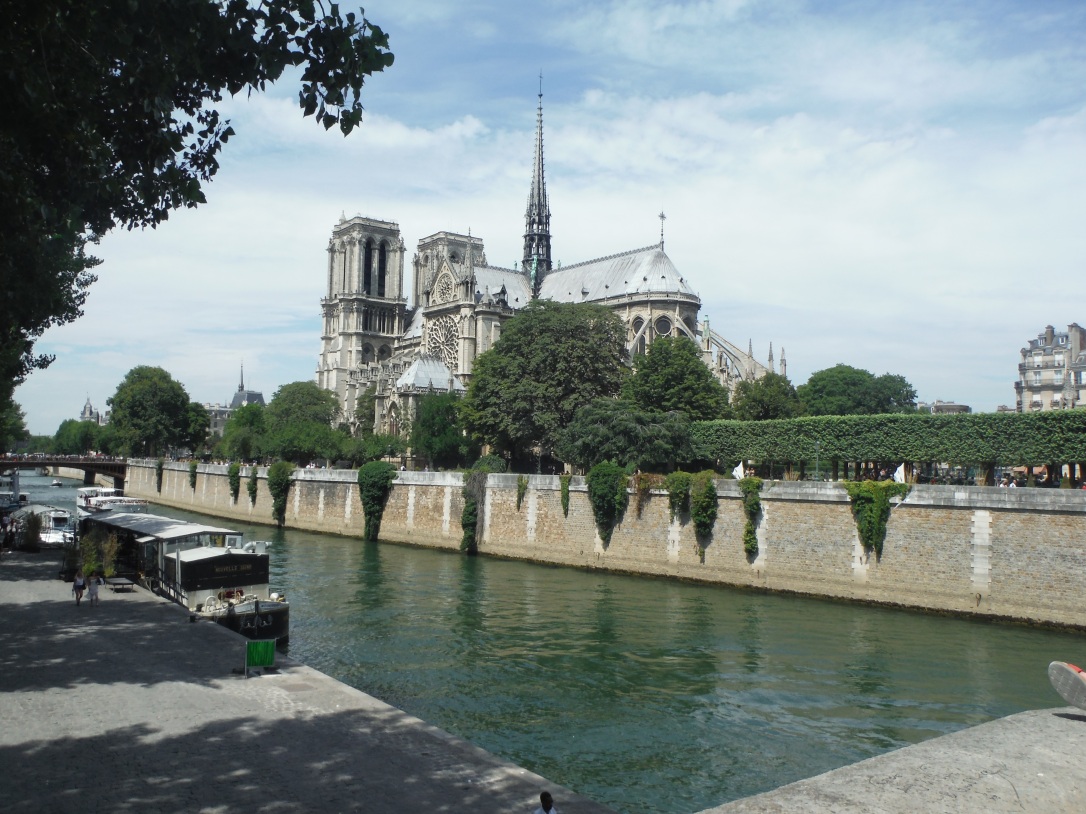 I was just one of millions who were shocked yesterday at the fire that destroyed Notre Dame in Paris, France. But all the memories I had from nearly four years ago with this structure came rushing back. While in Paris, I loved walking to this city center and did so several times. I took a walking tour around the island that taught me a lot about the history and art. I climbed to the belltowers, found sanctuary inside the sanctuary, attended an evening service, picnicked in its shade, and even explored the underground crypt. I never imagined that this building that pointed to God for over 850 years would be destroyed in my lifetime.

Without the dedicated firefighters working hours upon hours yesterday, Notre Dame would be in worse condition than it is now, and for that I’m thankful. But we must also remember that it’s possible there wouldn’t be a cathedral to save today if a writer hadn’t saved it nearly 200 years ago.

Victor Hugo and The Hunchback

Notre Dame de Paris wasn’t always as beloved as it is now. After years of neglect, it found itself in a state of disrepair in the 1800s. At the time, a Parisian writer by the name of Victor Hugo decided to do something about his beloved city center. He wrote a book titled Notre Dame de Paris. It ended up being translated into many languages. In the English translation, it was titled The Hunchback of Notre Dame. Maybe you’ve heard of it?

As the popularity of the book spread, readers spilled into Paris to visit the now-famed Notre Dame. This eventually pressured the government to restore the cathedral to its former glory. Why? If you haven’t read the book, the story might not be what you’d expect. Many of us think of the Disney adaptation, which, while I didn’t enjoy it much as a kid, as an adult it became one of my favorite Disney movies due to its unique themes. Victor Hugo actually spent more of his book describing the Notre Dame, with the storyline more as a selling point. It’s even darker than Disney’s darkest cartoon, and does not have a happy ending. But the point was made, and Victor Hugo got his real-life happy ending of a restored cathedral. I was able to visit Victor Hugo’s final resting place in the Pantheon in Paris, lying amid other famous French who shaped their culture. 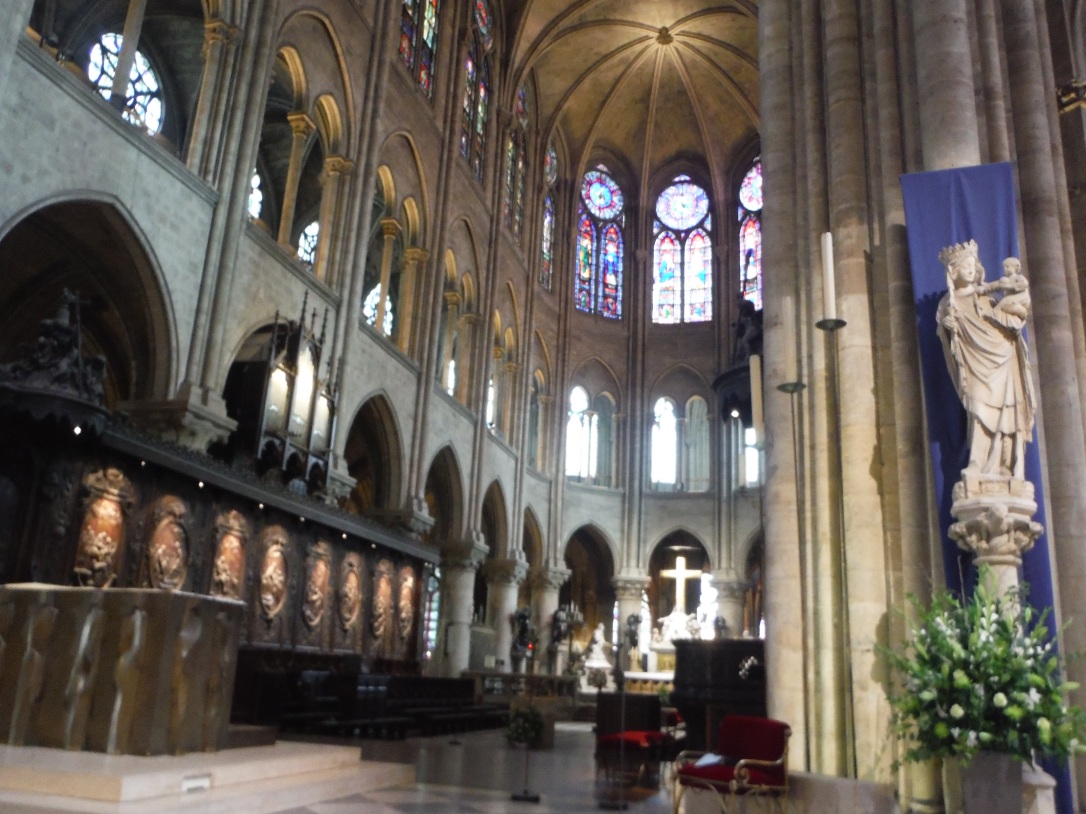 What Writers Can Do

As I watched the live updates of Notre Dame burning, I couldn’t help but think of Victor Hugo and how he used his character Quasimodo to save the cathedral only to have it destroyed today. But if a writer could save Notre Dame once, could another writer save it again?

I’m not saying that writer is me. Although I have toyed with an idea of a story about a backpacker who visits places like Paris, it’s still only an idea in my head and not on paper. I did feel a personal connection to Quasimodo as I stood in “his” belltower, I actually have the same type of scoliosis that this character did. (Obviously, mine is a mild case where his was much more extreme.) As an urban backpacker, this can cause extra pain as I travel. Paris was the first place I visited in Europe, and while I was already starting to feel pain there, I couldn’t help but feel like it was a place of refuge and freedom.

But most of us are writers in some form or another. In this modern age where anyone can be published, maybe we all can work together in writing our way to save Notre Dame again. I’ve already been inspired by the news reporters saying that it will be rebuilt (though we don’t have a timeframe yet- hopefully in this lifetime!) and the people on social media who have pledged money and shared their own stories. If you’ve been to Paris, share your personal experience so that the Notre Dame’s memories will not disappear, even if its roof has. If you haven’t seen Notre Dame, I know its tales have still affected you in some way. Share what you’ve learned about the historic cathedral, or write about how excited you are to see it being rebuilt. Who knows? Maybe one of us will become the next Victor Hugo, writing a book that features the future Notre Dame.

Start now: What’s been your experience with the Notre Dame, whether in person or through books/movies/etc? How did you feel when you heard it caught fire? Share with the world in the comments below!

Nebraska was on my mind a lot this month. I lived just outside of Fremont, Nebraska for two years. Even though my last visit there was in 2014, I still think about it.

At the beginning of the month, I was asked to write this blog post called Omaha After Five, part of a series for business travelers who want to explore the cities they’re visiting after work hours. I had to do a little research to freshen up and make sure my memories were accurate, but it seemed like time moves slower and nothing ever changes in the Midwest.

Then the flood hit.

Much of Fremont had to be evacuated, along with many other areas along the Platte River. Since I lived and worked on a property situated right above the Platte, it’s been crazy to see how what normally is a fairly calm river among the plains can cause so much damage.

While there is danger of the flood returning, the water has mostly subsided. However, the damage has been done. Families have been displaced. Roads have ruts bigger than the cars that can’t drive on them. Structures have been swept away. Farms have been ruined. So what can we do to help?

There are two things that need to be done: help for the people and restoration for the state. I’ve made two donations to different organizations that are each helping with one of these aspects.

My heart really goes out to the people. That’s why I’m so glad so many people and organizations are stepping up to help those in need. I made a donation to the Salvation Army who has been doing a lot in Fremont, Nebraska, but other relief organizations and churches are involved as well.

I first signed up for the Operation Blessing’s volunteer alerts when I was living in Nebraska myself. I’d just heard about another flood, though this one was in New York. I wanted to be in the know in case any nearby disasters struck and I could get involved. This charity organizes work projects for disaster-affected areas. Although I no longer live in Nebraska and am unable to make it there at this time, I still get Operation Blessing alerts for all over the country, and they have one for Fremont right now! As with any relief effort, make sure you register ahead of time and follow all of the guidelines instead of just showing up at the worksite. You don’t want to contribute to creating more of a problem than they already have!

When I first stepped foot in Nebraska, it was also a pretty stormy day! It was raining and thundering while I was still in the air. While the plane was landing, the guy in the window seat next to me told me to look at what he was pointing down to: a farm covered in water. When a coworker picked me up, before we even left the airport, we thought someone threw a baseball at her windshield. It turned out to be the first drop of a softball-sized hailstorm that ended up totaling her car. But the next day, all was clear. My northwestern upbringing left me in shock at the view of endless corn and soybean fields.

Since Nebraska provides much of the country with beef, corn, and soy, this flood could affect all of us. Obviously, helping the farmers will help restore the economy, which will ultimately help with the roads, buildings, and everything else that needs repair. That’s why I donated to Nebraska Farm Bureau’s Disaster Relief Assistance.

Have you ever felt personally connected to a disaster? Share in the comments so we can support each other!

When I wrote about my experiences in the newspaper, I didn’t really expect to be in the newspaper again. It was something that only happened when I was a kid, and even if I did eventually do something newsworthy, the paper would probably be too outdated by then. But apparently, my picture was in the paper two weeks ago. I didn’t find out until today when I saw the front local page from February 8th:

While at the Chinese New Year Parade, someone came up to me saying they were from the Mail Tribune and asked for the name of one of “my” kids. I assumed it would probably be something that may be displayed on their website. I didn’t think it would actually get in the newspaper, and I especially didn’t think I would be included in the photo!

In case you can’t tell where I am (because even my own mother had trouble finding me!) I’m the one in all black on the left side of the top picture. You can tell it’s me because what other adult would wear socks with smiley faces on them?

But since it took me two weeks to find out about this feature (and I only knew this when the featured kid showed me how his family was planning on preserving the article today), I do have to wonder: who is actually reading the newspaper these days?