Do you believe in Bigfoot? Up until several years ago, I never even thought of the possibility of this creature’s existence.

At the time, I worked part-time at a now-defunct gift store called All About Oregon. On slow days, I tried to get to know the merchandise better, which included thumbing through all the unique guidebooks. In one book, I discovered that there was a Bigfoot trap somewhere in the mountains. I laughed at the concept. But soon after, All About Oregon started selling Bigfoot merchandise. We were even given a cast of what was believed to be a Bigfoot footprint, so we displayed that on a table surrounded by books about Bigfoot, a map of Bigfoot sightings, and various other Bigfoot souvenirs. My curiosity increased along with the rest of my coworkers. I even wanted to take a road trip to find the alleged Bigfoot trap deep in the woods, but instead I moved to the Midwest, where Bigfoot does not live.

Before I go on, I should give a big of background on Bigfoot. There are hundreds of legendary creatures around the world, and Bigfoot is the one that is native to the Pacific Northwest. Also known as Sasquatch, these large, ape-like animals are thought to be very intelligent, and also very smelly. Although most people think the people who are adamant about Bigfoot hunting are simply crazy people, but there are even research groups who have been intrigued by the possible skunk ape. In fact, the North American Wildlife Research Team wanted to study Sasquatch, so they built what is known as the world’s only official Bigfoot Trap inSouthern Oregon, just a few miles from the California border. This was a small shack with a steel drop-down door, and was baited with raw carcasses. After several years of attempted trapping and only being able to catch bears, the door was secured open and became an obscure tourist attraction.

I had completely forgotten about the Bigfoot trap, until a few days ago when I was perusing RoadsideAmerica.com. This is one of my favorite travel websites because you can search for unique, and often free, roadside attractions near your home or along your travel route. A little over a year ago, I planned a road trip where all my stops were inspired by attractions I found on Roadside America, and before I travel, I’ll often visit this site to see what quirky things are near my destination. I was searching for attractions in Southern Oregon last week when I rediscovered the Bigfoot trap. I immediately started making plans to go. 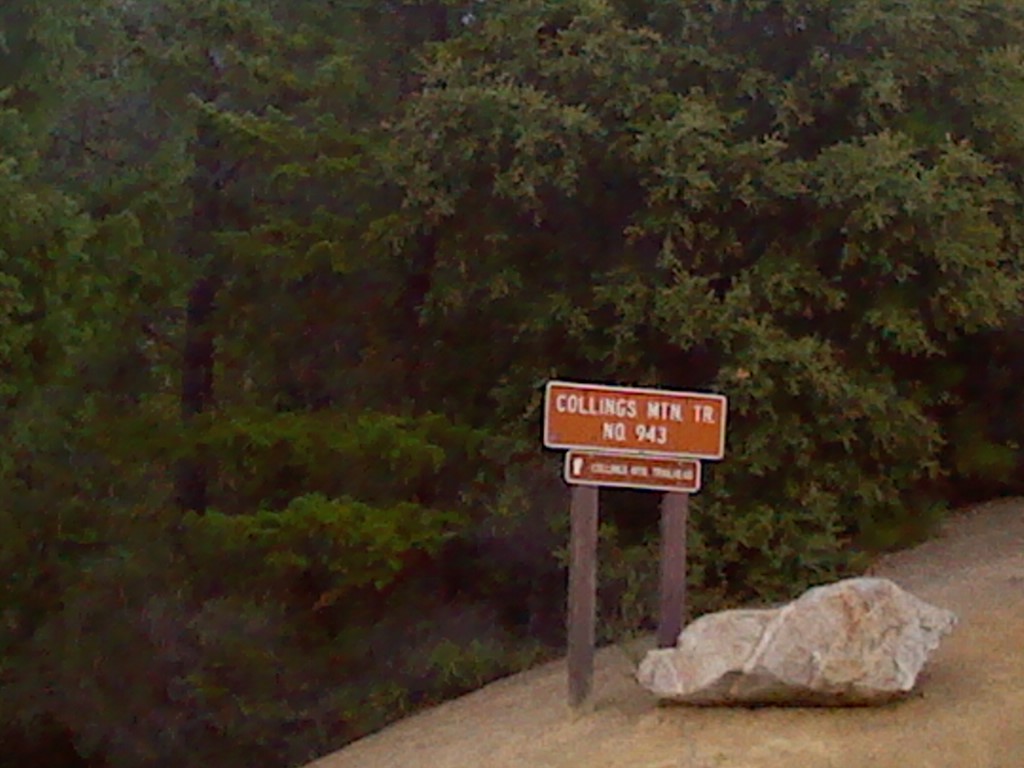 Who else would be better to visit the Bigfoot trap with than my coworkers who got interested in it with me in the first place? Two of my former coworkers from All About Oregon, Megan and Steph, along with Megan’s daughter River, joined me on this day excursion. It was a long, peaceful trip through farmland and forest. After driving quite a few miles along the Applegate Highway, we arrived at the Collings Mountain Trailhead, just across the street from a beautiful view of Applegate Lake. There are actually no signs at all to inform visitors that there even is a Bigfoot trap in the area. The only clue the road signs give is that the Collings Mountain Trailhead sign includes a picture of a foot. Most people would assume that this symbolized a walking trail, but Bigfoot hunters know that this is the way to find Bigfoot.

It was supposedly a half-mile hike to get to the part of the trail with the Bigfoot trap, but because this trailhead also had trails that went to the summit of Collings Mountain, as well as trails for biking and horseback riding, the several forks in the road confused us quite a bit. I was glad to have brought a GPS with me, with the coordinates for the trap already plugged in! However, with the mountains and thick forest interfering with the GPS signals, we did up going on the wrong path once, but soon realized that we had walked too far. 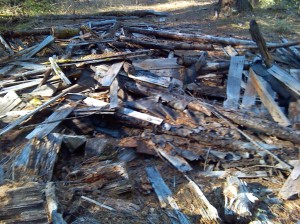 The first man-made feature we found was a completely-destroyed cabin. This was the shack that the trap’s caretaker lived in. All that remains are a few boards on the ground, but through close observation you can somewhat gather what it must have looked like. After walking just a little bit further, we finally saw the Bigfoot trap off in the distance! 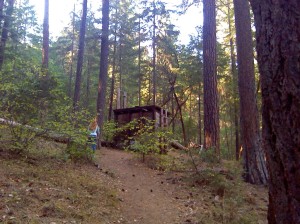 Because it hasn’t been refurbished for years and doesn’t officially belong to anyone, the trap itself has turned to a sort of log book where visitors have vandalized. We enjoying crawling under the door and being “trapped”, and just being amazed at the notion to build a trap in the middle of nowhere to find a creature that may or may not exist! 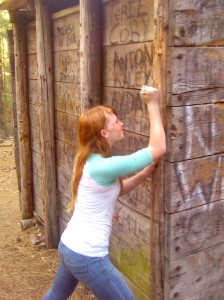 While the Bigfoot trap was the point of our trip, we had a few other things we came to do. I wanted to introduce the other three to one of my hobbies: geocaching. In the near future, I will be dedicating a post all about geocaching, but when I describe it to people who have never heard of it, I say “It’s like a worldwide treasure hunt for grown-ups!” Since finding Bigfoot proved to be too difficult, I figured that maybe we could at least find a few geocaches. I plugged in the GPS coordinates for the cache closest to the trap. Like I had mentioned before, my GPS was acting really jumpy in the area, so this one proved to be a challenge. Based on the cache’s description, we’re pretty sure we found the tree that the cache was hidden near, but we did not find the ammo can that contained the geocache. But not to fear; we had more geocaches to find!

As we walked back towards the car, we were also on the lookout for another geocache. The GPS worked better in this area, and although this was still a tricky one to find, we went in the right direction. This was not only River’s first time to geocache, but she was also the first of us to find the geocache container! 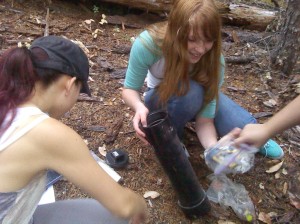 This was a really nice geocache, except for the fact that some of the items inside got a little damp. We all signed and dated the logbook, and then we each traded a small trinket we bought for an item inside the cache. We then closed up the container, hid it back where we found it, and continued back toward the road. As we were walking, I realized that almost all the hikers who go on trail must have Bigfoot on their mind, regardless of whether they’re Bigfoot believers or Sasquatch skeptics. I joked that if I had a large expendable income, I would get a few life-sized figures of Bigfoot and hide him just far enough away from the trail that people might catch a glimpse. Everyone else agreed that they would do the same thing. I’m surprised no one has done that yet!

There was one more small geocache across the street from the trailhead. Steph found it wedged behind the railing. Once again, we all signed the log and traded items. From here, we enjoyed the view of the lake, and then got back into the car.

A few miles down the road is the McKee Bridge. It is the longest of the four covered bridges in that county. While it hasn’t been open to cars for a long time, it was unfortunately also closed off to pedestrians a couple years ago for being unsafe. They have since raised the money for repairs, but because the repair work hadn’t begun yet, we could only get up to the opening of the covered bridge.

As we walked back to the car, Steph and Megan were discussing that they had a favorite restaurant in historic Jacksonville, which was the closest town. They then turned to me and asked “Jes, do you like sushi?” I don’t like sushi, but I agreed to go to Umi Sushi. I found out that there are actually fish-free options for sushi, so I decided to be adventurous with this new cuisine and order a bento box with avocado rolls. (River was even more adventurous and got eel sushi!)

Overall, it was a crazy day of unique adventures. Although we didn’t find Bigfoot, we did discover new things not too far from our Southern Oregon home!

9 thoughts on “Looking for Bigfoot”