When I lived in the Midwest, I would have gone crazy if I stayed even one week in the same county! In fact, going to different counties was an almost-daily occurrence. In Ohio, I lived and worked in tiny Morrow County, which didn’t have much of anything. I would go to surrounding counties to attend church, go shopping, and basically live my entire life! In Nebraska, I lived across the river from Fremont, the county seat of Dodge County. However, the Platte River was the county border, so I actually lived in Saunders county. Every time I went to town, I switched counties, even though it was the same city!

But since I’ve moved to Southern Oregon back in September, I have not stepped foot outside of Jackson County. Fortunately, it’s not the same as the Midwestern counties I lived in. It’s really huge, and there are a ton of things to do! I recently decided to take a day trip around just a section of Jackson County, and I realized that there is so much I still have not seen! (And I’ve lived here nearly 20 years!) So without further ado, here is my one-day road trip in Jackson County, Oregon.

The first stop was not a planned stop. But after going through Eagle Point, this house was on the side of the road and I just had to stop for some snapshots.

You may have seen this house before. Do a Google Image Search for “retiring on a budget postcard”, and the first thing that will pop up will likely be a popular postcard picturing this house. 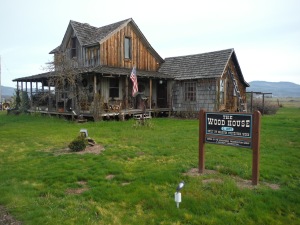 It’s actually called The Wood House. Although the house is certainly made from wood, it’s actually named that because of the name of the family who built and lived in it. 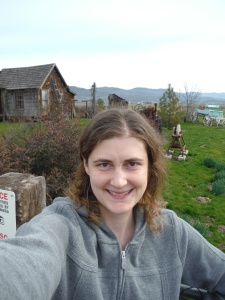 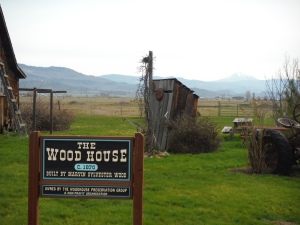 Everything except for a picnic and parking area is fenced off to visitors, but it is interesting to look at this longstanding house, as well as all the other old artifacts decorating the yard.

The second stop also wasn’t planned, but I had considered stopping at Lost Creek Lake. I ended up going to Joseph Stewart State Park’s day use area, just to walk around and behold the scenery.

The next stop was the highlight of the trip, and what I had planned the entire trip around. After driving to the little mountain town of Prospect and realizing that I had perhaps driven a mile too far, I turned around and ended up at the parking lot for Mill Creek Falls Scenic Area. 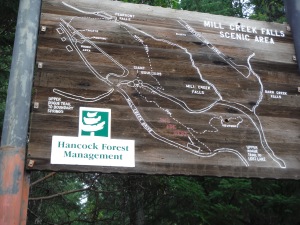 After a decent-length hike through the hilly woods, I arrived at a lookout point for the 173-foot Mill Creek Falls!

But after hiking a little bit further, I came to an even better site: Barr Creek Falls is 242 feet high, and the lookout for it was situated at a nice pile of rocks where I could sit and eat my lunch. 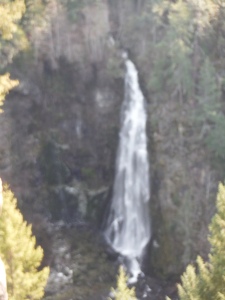 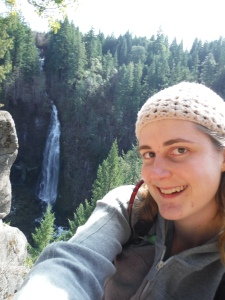 The area also had a good view of the river below, and nearby were some spots where I could hang my feet over what looks like a death-defying ledge! 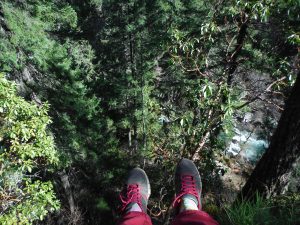 When I had my fill of the falls, I took the trail over to another path that took me through an area filled with giant boulders and down to the bottom of this canyon. I saw what remained of the area’s first power plant, climbed rocks, and even did a TINY bit of splashing in the water! (Too cold to actually play in it!) 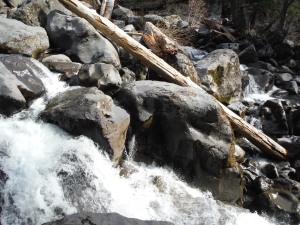 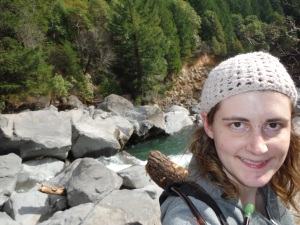 My final stop before heading home was back at Eagle Point. The Butte Creek Mill is listed on the National Register of Historic Places, and is part mill, part free museum! A video near the entrance pointed all many fascinating facts about the mill, the surrounding area, and the items inside. 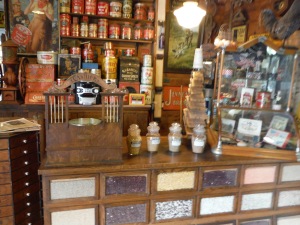 After touring the mill, I walked along the path behind it downstream until I got to a covered bridge! 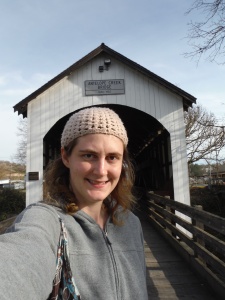 Now I have been to half of the Jackson County covered bridges this year, and I hope to see the others soon!

This was a ton of sights to cram into one day, but oh so very worth it! And I still haven’t seen everything in Jackson County! Of course, my traveler’s heart will likely lead me out of this county very soon!