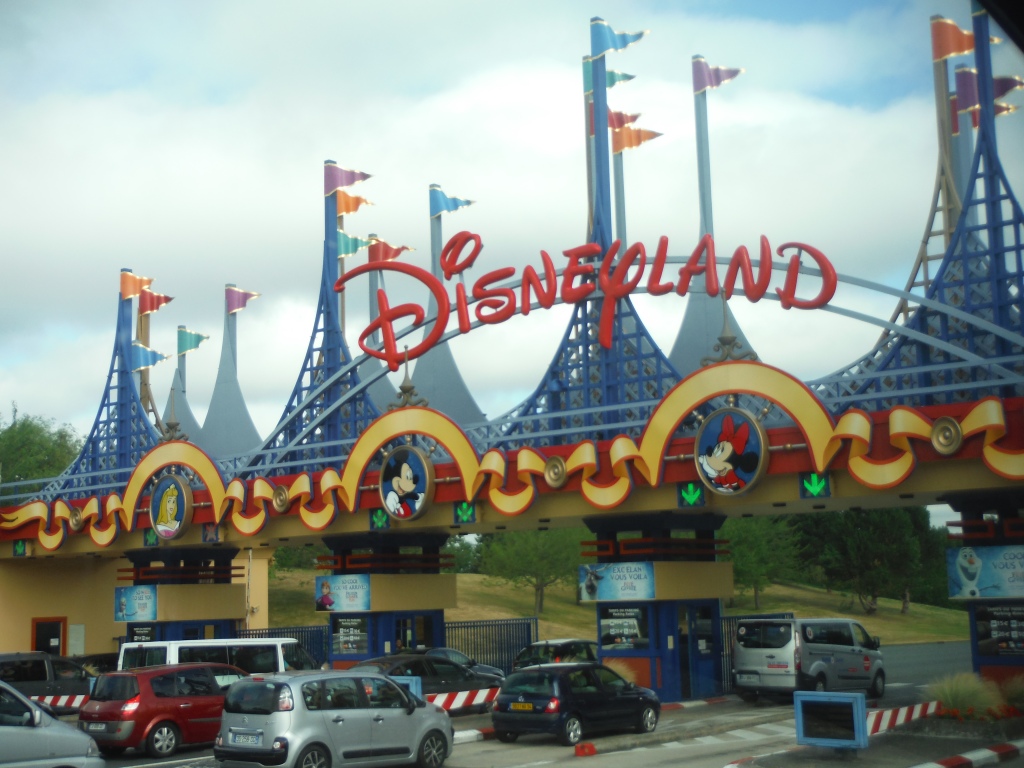 While in Paris, I took a day trip to Disneyland. I was fortunate that my parents’ favorite family vacation was going to Walt Disney World, so I went there several times when I was young. When I was even younger, we would take day trips to Disneyland while visiting relatives in Southern California. It was pretty much a no-brainer to blow my daily budget for the opportunity to go to a Disney Park while abroad!

Needless to say, I loved the experience and my new goal is to visit the Asian Disney Parks. (And also go to Disneyland’s California Adventure. How have I not been to that park yet?) But when asked if I liked Disneyland Paris more or less than Disneyland in the US, I’m not entirely sure what to say. So today, I’m going to break down the perks of the parks in the United States and France, and you can help me decide which one is better!

US: At Disneyland in Anaheim, California, a one-day ticket is $99 for anyone aged 10 or older. This only lets you into either California Adventure or Disneyland. To get into both, it is an extra $40 for a park hopper ticket. Walt Disney World near Orlando, Florida, has a higher price for their Magic Kingdom at $105, but the other three parks are only $97 for ages ten and up. A park hopper pass at the Magic Kingdom is $64. Note multi-day tickets do lower the cost per day, and these prices were taken January 26th, 2016. Tickets in more tourist seasons do cost more.

France: Disneyland Paris has a drastic seasonal price difference, due to lack of year-round warm weather like California and Florida. Right now a winter ticket starts at $64 for ages 12 and up, but a ticket that can be used any day of the year is $115. These tickets are valid for both of the parks (or, as they say in France, “parcs”), so no park hopper pass is needed. This is the price you get from the US website, but if you use the international website, you’ll find winter tickets starting at 47 euros and year-round tickets at 74. This is usually cheaper, so purchasing from the international version of the website will save you lots.

Winner: Disneyland Paris No matter how you look at it, it’s a lower price!

US: I love taking the Walt Disney World Magical Express from the Orlando airport to the resort my family stays at, and then the free bus service between the Disney hotels and parks. It’s probably the only positive part of US Disney’s current transportation situation. I remember when California Adventure was built in Anaheim, and Disneyland had to go from a spacious parking lot to a multi-story garage. Although I’ve only used the bus transportation in Florida (which takes you right to the park entrance), the parking lots did look spacious, although many people have to take the tram because they park so far away.

France: I purchased the Disneyland Paris Express, which picks you up from one of several downtown Paris locations and escorts you to the Disneyland parking lot for 99 euros. (Neither of the US Disney Parks offer a similar service from LA or Orlando.) The parking lot was spacious, but surprisingly far away from the entrance and it took several minutes and moving walkways until I could even see the parks. I liked this service, but if I were to do it again, I would instead take the metro. It costs about the same as the extra cost of the Disneyland Paris Express ticket, but it’s faster and brings you closer to the entrance. You actually pass underneath one of the Disneyland Paris resorts on your walk into the park!

Winner: Disneyland Paris Neither country has perfect transportation. I do wish the buses could get closer to the park entrance, but there are more options to get around and this park seems to be better connected to the city.

US: The original park, Disneyland, is in California. The turn of the century brought a second park to Disneyland, called California Adventure. Over in Florida, Walt Disney World consists of the Magic Kingdom (similar to the Disneyland park), Epcot, Hollywood Studios, and Animal Kingdom, plus a couple of water parks and other fun attractions.

France: The first park in Disneyland Paris is Disneyland, which of course is pretty similar to the Magic Kingdom or the original California park. The second and final park is Walt Disney Studios, which, while it has a several unique attractions, is most comparable to Hollywood Studios.

Winner: US Disney Parks It would be harder to determine a winner if I were only comparing Disneyland Paris with Disneyland in California. But with Walt Disney World, it’s no contest. The French Pavilion in Epcot alone had as much French culture as all of Disneyland Paris.

US: Being the oldest parks, most of the famous Disney rides originated in the United States. Instead of listing all the attractions that can also be found in Europe or Asia, I’ll point out a few of the unique highlights. A longtime favorite ride of mine has been the Twilight Zone Tower of Terror. This one is also in France, but the US version offers a longer ride. The Animal Kingdom has completely unique rides, including several with real life animals! And while Epcot is still in my home country, rides like Spaceship Earth, The Seas, Mission: Space, and Ellen’s Energy Adventure have me thinking about the world as a whole.

France: Most rides, especially in the Disneyland Parc, are carbon copies of United States originals. But the French have a few winners of their own. “Moteur, Action”, is a show that was brought to Hollywood Studios as “Lights, Motors, Action”. Unfortunately, that show can now only be seen in France as it was closed in the US for the upcoming Star Wars renovation. An attraction that hasn’t been brought to the States yet is “Ratatouille: The Adventure”. This is a fun 3-D ride around French fine dining from a rat’s perspective. US parks should take note on this ride’s creativity!

Winner: US Disney Parks This one was REALLY hard to decide. In the end, my tiebreaker was that The US copied very little from other nations’ parks, and also that several parks means a wider variety of rides are offered. If I had to take the average ride from each country, I think it would be a tie.

US: When you ask an adult why they take their family to Disney Parks instead of a competitor, they don’t say it’s because of the rides or the characters or the price. It’s because “it’s clean!” Every other amusement park I’ve ever been to had an undertone of sketchiness to it. I know that they were probably perfectly nice parks, but Disney’s cleanliness standards have just set the bar too high.

France: Disney’s need for clean translates into French, too! Like the US parks, you won’t find messy gum for sale, but you will find a trash can within a few feet of wherever you’re at. Also like the US parks, smoking is only allowed in designated areas. Unfortunately, this is not enforced quite as well as some of my time waiting in the queues involved choking on smoke from people ahead of me.

Winner: US Disney Parks I’ve seen people smoke outside of designated areas in Walt Disney World too, but the reputation of cleanliness is better displayed here.

Winner: Disneyland Paris For no other reason than I love how the sides have retaining walls, making grass grow halfway up the castle!

So I guess it is possible to break Disney down into categories and determine a winner for certain elements, but I still don’t know who should win overall. Which park sounds like a winner to you?

1 thought on “Disney Parks: US vs. France”